This year is set to be the year of Gatsby! With the movie due out in December in the UK, the arts and fashion scenes are gearing up for 1920s mania and what better excuse to don your finest drop-waist gown and head out for some prohibition-esque activities!

I went to see the stage version of The Great Gatsby on Friday. Hosted at Wilton’s Music Hall, you could not have found yourself in a more authentic location. Located in east London near Tower Hill, Wilton’s Music Hall is all crumbling plaster with a genuine historical charm dating back to around 1743. Now grade 2 listed, it is one of London’s last remaining concert halls. It was as though we had genuinely stepped back in time.

We queued up at the bar while the sounds of Al Johlson and the Charleston set the scene. From Side Cars (brandy, cointreau & lemon juice) to Mint Juleps (bourbon, mint & soda), all the original cokctails were there to choose from. My favourite however, was the punch with gin, maraschino liqueur and elderflower with plenty of berries to top it off.

As we settled into the play, we were all transported to another era and by the end were all wishing this moment in history was something we had somehow been part of. This may have partly been down to numerous cocktails consumed, but there was equally something very exciting about living in these times – especially if we had been lucky enough to have attended one of Jay Gatsby’s house parties! 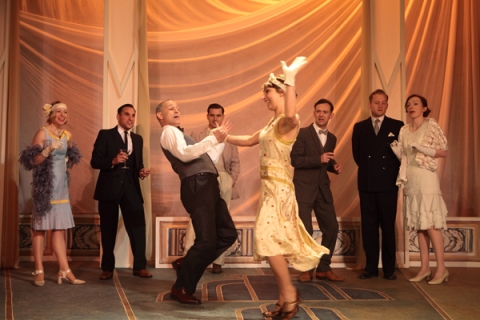 One thought on “Gatsby-inspired cocktails”